This is my jam submission for PIGSquad's 2022 Tabletop Jam. This game is currently in a very early prototype state as the basic design remains unfinished and untested at the time of submission. What follows are the conceptual details.

Pro-tip: when designing games within the continued pseudo-isolation of an ongoing pandemic, try to design around what you can conceivably test; which I very much did not do here by deciding to make a strictly four player game yet not having ready access to at least three other players to easily playtest with, and which has left me submitting my least "completed" game jam project to date.

The Inspiration:
After the theme for this jam was revealed to be "Fabletop", I did not find any gripping ideas springing to mind, so I asked my girlfriend what her favorite fable (or fable-like) might be; she responded with Cinderella, and I instantly thought of the concept for this game: a four player card game wherein one player is Cinderella, the other three are each a step-sister, and all are vying to be the one to attend the ball based on chore allotment.

The Idea:
With the concept formed, I began to noodle on how such a game might play out. The core mechanic seemed clear enough to me: each step-sister would hold a hand of chore cards and would "play" these undeclared toward the Cinderella player, who would then retrieve that round's cards and choose one of the tasks to play upon herself, thus freeing the step-sister who played the card from that chore's responsibility. The individual end goal of each step-sister would be to end the game with the least amount of personal chore responsibility so as to be the freest to attend the ball; Cinderella's end goal would be to keep the overall task allotment balanced among her step-sisters thus affording herself the opportunity to sneak out to the ball.

The Prototype:
When I sat down to create a rough physical prototype, I grabbed some blank index cards and decided on a count of 36 -- 12 named chores repeated 3 times, each step-sister holding 1 copy of a named chore in her starting hand, and no cards held by Cinderella. I also used four smaller cards for character designations -- "Ella", "Oldest", "Middle", and "Youngest". I decided on shortening the name to Ella and chose to designate the step-sisters by age under the loose idea that doing so might later inspire a useful game mechanic (it does). And, once again with the thoughtful assistance of my girlfriend, I settled on 12 appropriate chores. With these initial cards, I ran a test game on my own to see how the interplay might work. Since I was running this test totally by myself, I shuffled each step-sister's chore pile and played the top card from each pile without viewing it (for the most part). As Ella, I would then retrieve the three played cards and select one to play in front of Ella's position as the task she chose to take on; this left two cards remaining in Ella's hand. I then tried allowing Ella to freely hand those cards back out to her step-sisters -- either both remaining cards to one sister or one card each to two sisters. Once Ella had completed both her task selection and card returns, the step-sisters would then each look through their own hand and if they held a copy of the chore Ella just chose, that sister would be forced to play that card from her hand on to herself. In instances where a sister held multiple copies of a chore, she would be forced to play both copies on herself -- this occurs after Ella has handed the remaining cards back out, so if the same chore was in Ella's hand twice she could effectively force a sister to then also have to play that chore. After running through all the chore cards -- once Ella had one of each chore card in front of herself -- the final results of chore distribution among the step-sisters was very close: 7, 8, and 9 respectively. Without running additional tests to determine distribution rates, I knew some more mechanics would have to be incorporated to allow for more interesting player interaction and to more purposefully affect the outcome.

The Mock-ups:
Without the opportunity to really test, iterate, and test again, the next opportunity I had to work on this game I used to mock-up what a basic print-and-play might look like. Since I feel the rules are a bit too incomplete at this stage, I am not yet officially releasing the following images as a downloadable PnP file, but rather am just sharing them here for illustrative and descriptive purposes. 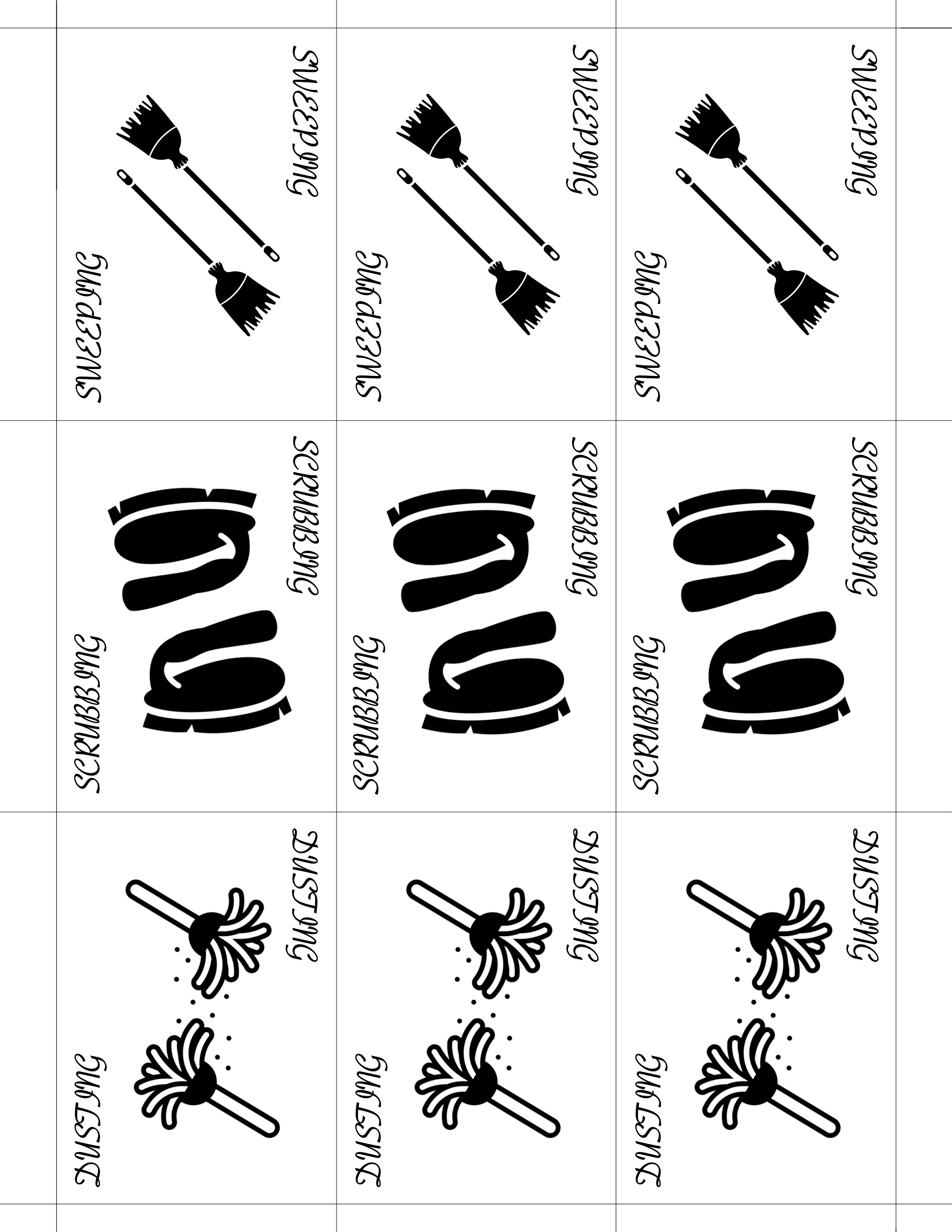 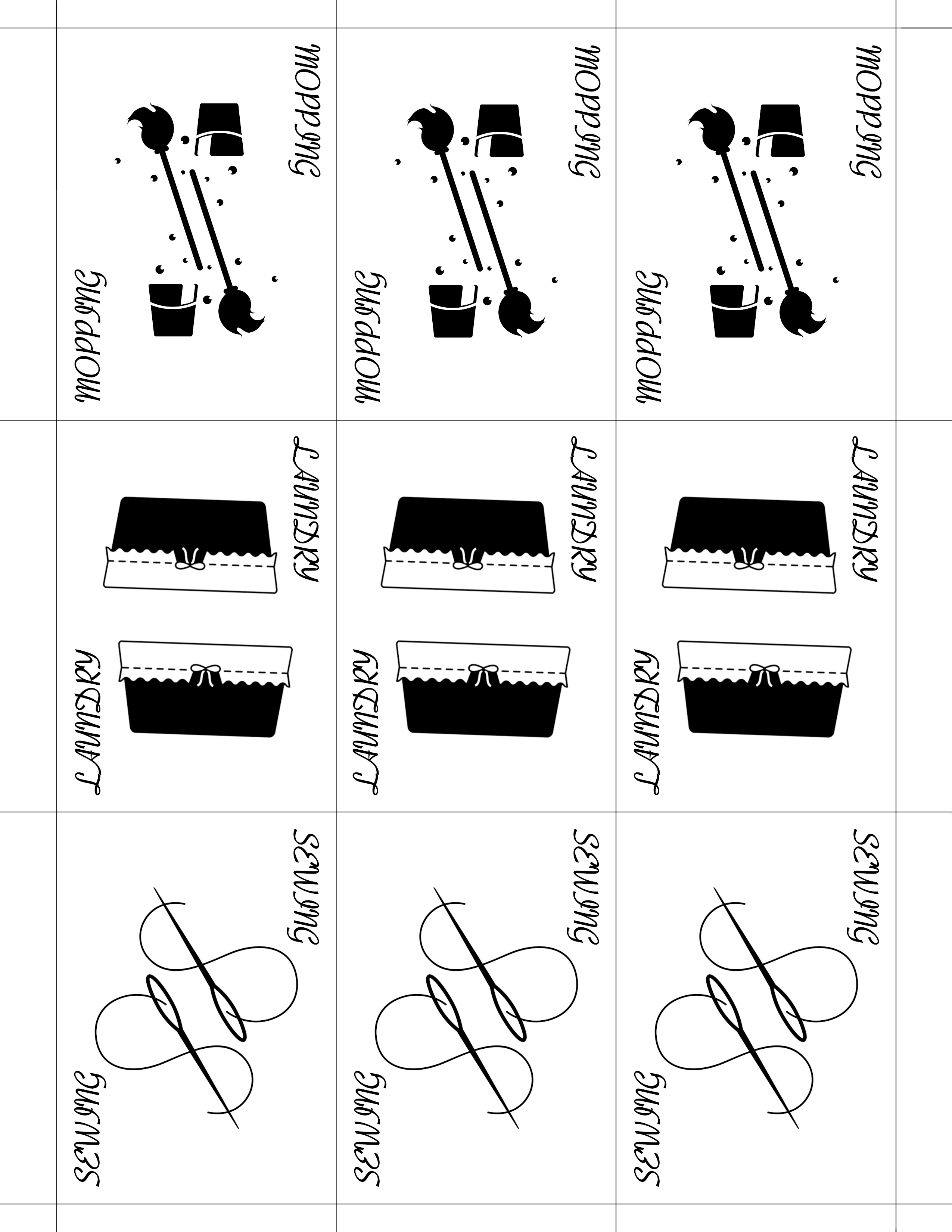 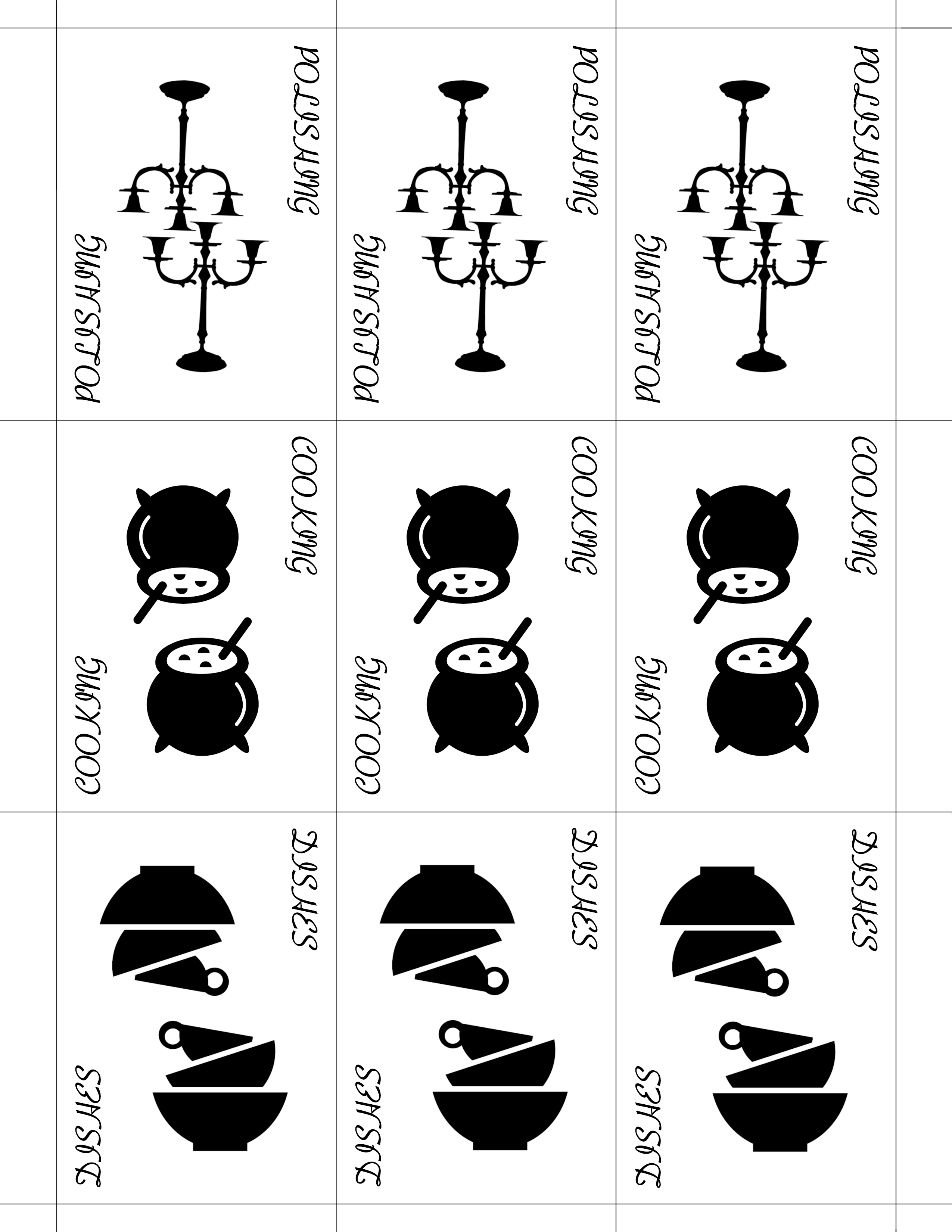 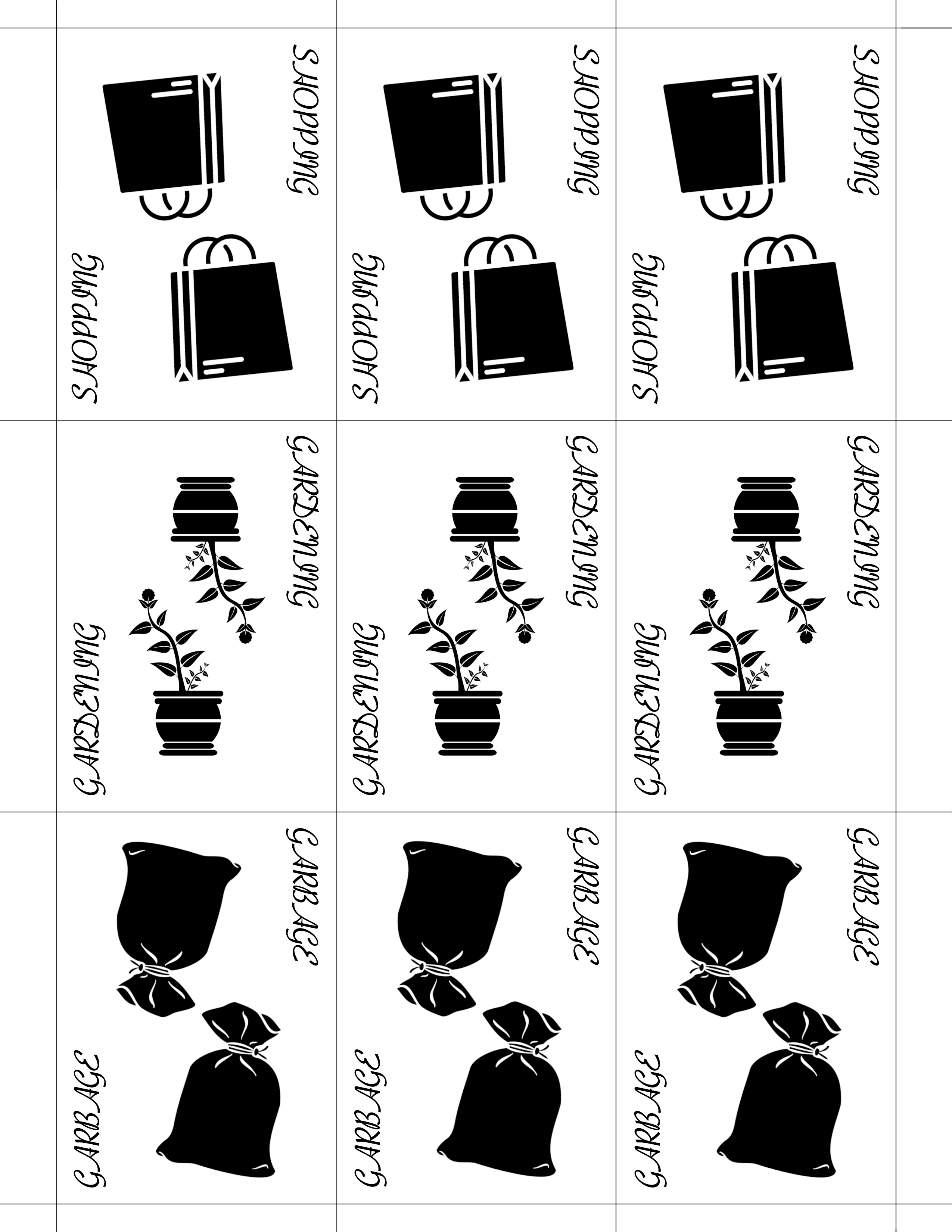 The icons used on the mock-up cards all come from https://thenounproject.com and are used under an attribution Creative Commons license:

*I've always found The Noun Project to be an invaluable source for all stages of game design, especially when creating solo as I often do. 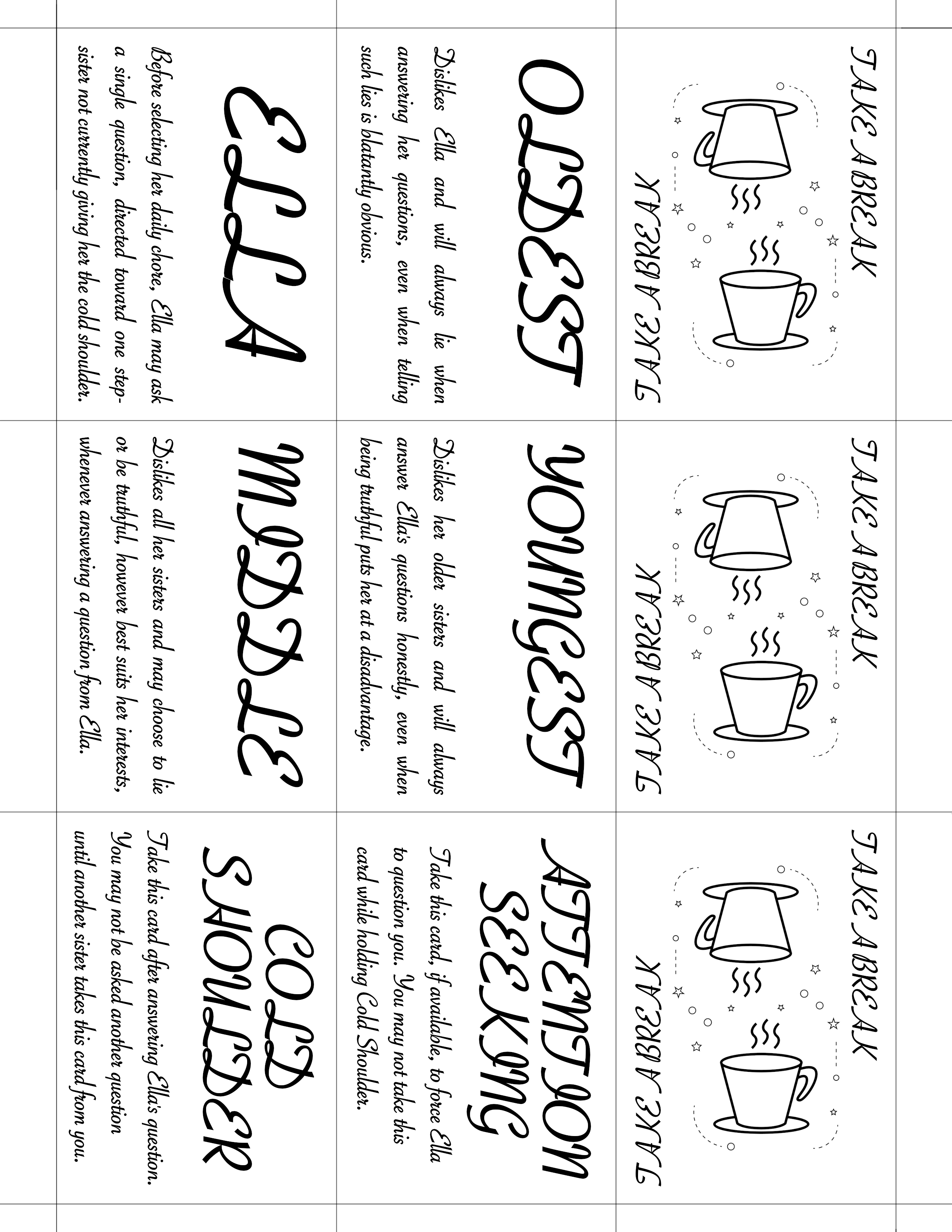 For ease of legibility here, I'll include plain text of these character and effect cards:

ELLA
Before selecting her daily chore, Ella may ask a single question, directed toward one step-sister not currently giving her the cold shoulder.

OLDEST
Dislikes Ella and will always lie when answering her questions, even when telling such lies is blatantly obvious.

MIDDLE
Dislikes all her sisters and may choose to lie or be truthful, however best suits her interests, whenever answering a question from Ella.

YOUNGEST
Dislikes her older sisters and will always answer Ella's questions honestly, even when being truthful puts her at a disadvantage.

COLD SHOULDER
Take this card after answering Ella's question. You may not be asked another question until another sister takes this card from you.

ATTENTION SEEKING
Take this card, if available, to force Ella to question you. You may not take this card while holding Cold Shoulder.

This is where my earlier idea to designate the step-sisters by age proved useful; I was already toying with the thought of allowing Ella to ask a single question each round and the age designations made it easy to incorporate a liar, a truth-teller, and a neutral respondent as a deduction mechanic. Now, instead of each player openly displaying their character card, only the player designated as Ella would, and all three step-sisters would keep their designation secret -- forcing Ella to deduce her sisters by their responses before effectively using her questions to influence her chore selection (a reminder that Ella's goal is to keep responsibility evenly distributed).

The Cold Should card is to keep Ella from repeatedly questioning the same player; while the Attention Seeking card can be taken by any step-sister wanting to be questioned, if they feel forcing it will be to their advantage -- perhaps if Ella has managed to keep things too well balanced.

The Take A Break cards were an idea for a possible additional "chore" card but with a special effect; it would be a card Ella could not choose for herself but if a step-sister had played it that round and did hold a copy of the selected task, she could instead play her copy on to either of the other two step-sisters. It's possible using the card could allow for selection from a special power pool which might include: card swapping, random selections, card retrieval, redistribution, as well as the aforementioned forced play on another.

The Future:
I'm realistic enough to know that, given the state of things and my continued inability to effectively test this particular game with an appropriate amount of players, as well as the fact that I have a bunch of other unfinished projects I "intend" on getting back to and still haven't yet, on top of a desire to be working on something more long term and with viable commercial potential, it is just highly unlikely I'll progress on this idea any time soon... but, hey, you never know! If you'd like to see me continue on with this, words of encouragement are always welcomed -- words of criticism much less so!

Thanks for checking this out! 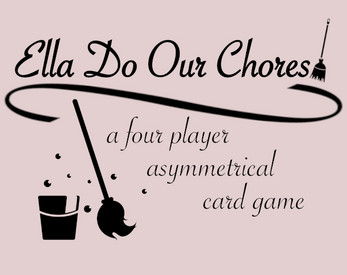