about a phone call

and a deeply personal secret

This project, in its current form, was created over 10 days in March of 2021 for the Portland Indie Game Squad (PIGSquad) Tabletop Game Jam. The theme was "a harmful resource".

Over the allotted jam time, the entire structure of the game was outlined in detail and then reformatted into a "rulebook" style pdf -- the first draft of which is uploaded here. Currently, only this pdf exists; no cards have yet been made with which to play the game. I intend on continuing development of this game, starting with additional editing passes on the rulebook -- while comprehensible, it can be confusing; and I'm well aware of my over abundant use and reliance on semicolons and em-dashes, which can probably be reduced.

In this verbal game two players will interact over a voice-only phone call, each embodying a yet unknown character. The story will play out over the course of a conversation, culminating in one player revealing a deeply personal secret to the other who will react to the sudden reveal.

Most folks, by their nature, want to tell stories but feel ill-equipped or pressured to be creative; to this end, this game utilizes many prompt cards and distinct conversation transitions.

The conversation between the two players will flow and be influenced by the drawing of prompt cards. The act of "playing" occurs through interpreting each new prompt and verbally communicating your character's thoughts, feelings, and responses within the context and flow of the conversation.

The storytelling the players will engage in will be just as much about uncovering the nature of their characters as it is their relationship and responses to the other character. The game will always conclude with each player fully aware of where their character stands as regards the secret.

I Need To Tell You Something.pdf 147 kB 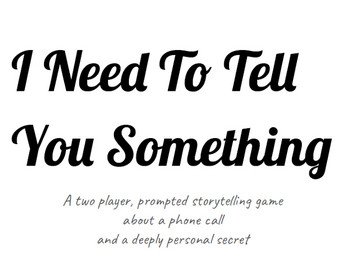